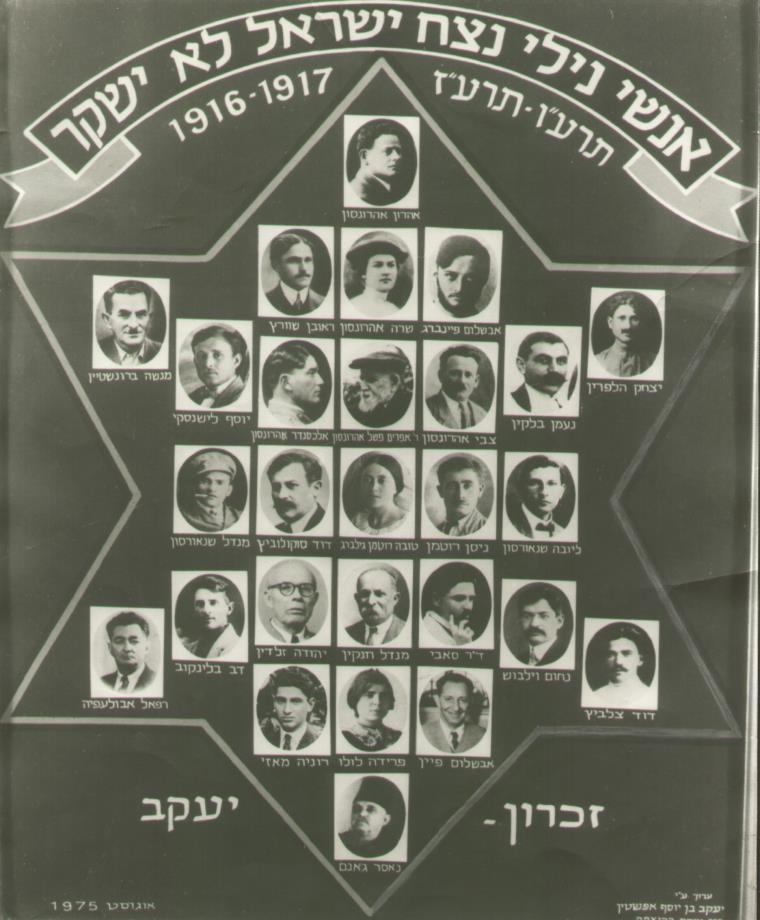 Nili: acronym for "Netzach Israel Lo Yishaker" – The Eternity of Israel will not deceive (Samuel I, 15:29 Dreamers and warriors, bearers of the rebellion against the Ottoman Empire.

The underground Nili network was established in 1915 and operated in Eretz Israel during WWI. Its objectives were:

To assist the British effort to conquer Eretz Israel by gathering information.

To support the Jewish Yishuv in Eretz Israel in a time of famine and disease.

To draw world attention to what was happening in Eretz Israel.

To fulfill the dream of establishing a Jewish State in Eretz Israel.

Nili was founded and led by agronomist Aaron Aaronsohn from Zikhron Ya'akov, joined by his sister Sarah and brother Alexander, as well as Avshalom Feinberg from Hadera, brothers Na'aman and Eitan Belkind from Rishon LeZion, Yosef Lishansky from Metula and dozens of others.

The organization operated from Athlit, where Aaron's Agricultural Experiment Station was located. British forces sailed regularly between Egypt and Athlit – the British warship Managam frequently came ashore at Athlit to collect the information gathered by Nili members. Information was also passed on via homing pigeon.

In the spring of 1917 rumors about the espionage organization circulated around the Yishuv. A number of events led to the exposure of the organization in September 1917: a British coin was found in the market in Ramleh, a homing pigeon failed to complete its mission and landed in the governor's yard in Caesarea and Na'aman Belkind was arrested by Turkish authorities.

Following these events, the Turks began a campaign of threats and terror against the Jewish Yishuv in order to apprehend Nili members. Many were in fact caught and tortured. Sarah Aaronsohn committed suicide after undergoing severe torture. Na'aman Belkind and Yosef Lishansky were executed in Damascus.

The bravery and heroism of the men and women of Nili helped the British enter Eretz Israel and end the Ottoman rule.

Order a tour in the museum

Please fill in the form and we will contact you shortly

The Archive is temporarily closed

The museum is closed on Saturdays and Holidays
As well as on Rosh-Hashanah Eve, Yom Kippur Eve, Pessach Eve,
Yom Hazikaron and Independence Day

*Entrance to the museum from 5 years of age

Access to the entrance area and the reception is user friendly.

The auditorium, where the film is screened, is accessible by elevator.

The film has subtitles, to assist with those with impaired hearing.

No waiting in line is required for the handicapped visitor.

Presentation of a handicap card provides a 50% discount to a handicapped visitor.

Strollers are forbidden inside the Museum. They may be left near the entrance.

All employees of the Museum are fully conscious of the need and importance of providing correct service to the handicapped.

Our Internet Website is compatible with the Equal Rights Regulations for people with disabilities.